Yesterday I had the pleasure of attending an event where Andrew Clarke had a Skype conversation with Jeffrey Zeldman. Here are my somewhat haphazard notes I took whilst there.

I wrote these down quite quickly, if there's anything I got wrong, or you have any suggestions, please comment below or tweet me @s10wen and I'll be sure to update. 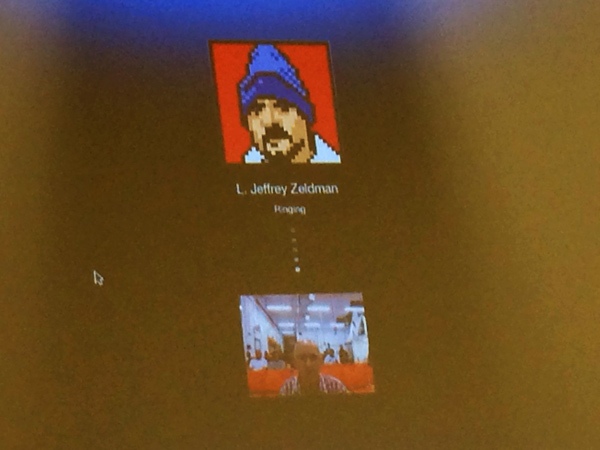 A Day in the Life

Walks daughter to school, goes to the studio (near empire state building), gets in early, install Yosemite, reading up on parenting, hour long session regarding an event apart, sorting out speakers for 2015 with Tobi?, checking out availability and the balance.

I think you need to know about all of it

1 track, ux piece, code piece, then this (the Skype chat), then after this a list apart and with all of this stuff, I have amazing staff to help.

Just launched 2015 event apart store, so for a month having expenses but not income and figuring that out.

Really cool about the web - everyone wants to share - Andrew Clarke did the 320 grid, put up on his blog rather than keeping it to himself.

How important was that for example for getting a book apart of the ground?

Jason Santa maria and Zeldman, had a reputation, so could go to people like Jeremy Keith and ask for a book based on HTML - Luke W etc.. and they all said 'Ok, we're in'.

Eric Meyer - he seems full of himself, lol telling people at Opera / CSS to do things.

Sometimes people don't know who Zeldman is and sometimes he'll talk to people at the start of an event apart with them asking him "Is this event any good?" and even after he's got up on stage they just think he's the mc.

I spent 4 years at a job I hated

If you run a design studio, you can't get fired and you like your boss (hopefully).

Someone can write a great article, but might not be great at speaking, we've tried it and it doesn't always work.

Public speaking = helps with self confidence, gives you the ability to go back to your boss 'articulate your ideas', can also improve speaking to clients.

Sara Soueidan @SaraSoueidan - SVG, can come from nowhere by being good and sharing.

What's the best way to get noticed

Don't try and get noticed, do good work, share and you will get noticed. If you start getting traction, then start blogging, nothing is about being a star, it's about sharing. Showing up at meetups, leaving (intelligent) comments and connecting with the community.

When Zeldman hired Jason Santa Maria; Zeldman used Photoshop, Doug Bowman used Illustrator. Unfortunately Doug had a back injury so Jeffery had to continue the work. Jeffery didn't feel he could complete the design Doug had started and they'd agreed on so Jeffery Googled 'Designing in Illustrator' and found an article from Jason Santa Maria on his blog, 'thinking about hierarchy' he was conveying ideas and he understood, so he approached him and finished the job Doug Bowman had started. Then worked with him again, and again. 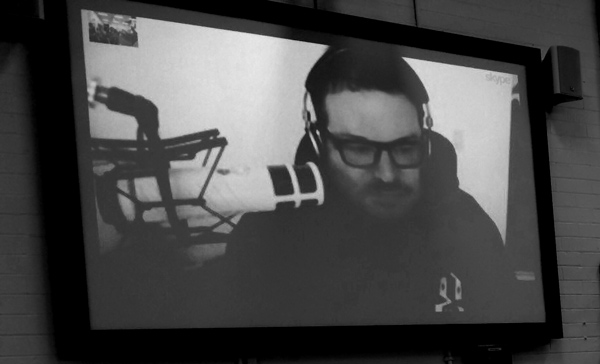 How important is to specialise in an area?

It depends where you want to work and what work you want to do. Web design has got a lot more difficult and complex. 'there is no fold' Million form factors on mobile devices / phones etc.. you don't know what a pixel is anymore. Less, Sass, frameworks. If you're a great designer / developer, you'll always have a good job offer - working in a team as a team leader. Same as if you're a jack of all trades - running the whole show for a small business.

Years ago, developers would learn new HTML tags and CSS as they were being created. Nowadays there's so much to learn from HTML, CSS and JavaScript as well as preprocessors such as Sass and Less, and build tools such as Grunt and Gulp. What advice can you give to students and people who are starting to learn now?

Great question :heart_eyes_cat:, get the basics first - semantic HTML, you don't need to learn Sass / Less first, or frameworks. Concentrate on learning the basics of HTML / CSS first and get them right.

It used to be easy going to 'view source' and looking over the source then researching it, but it's much harder these days to do this, due to pre-processors and writing code that compiles down.

Learning the design basics, type, good HTML, CSS, is a good place to start, then hey guess what there's JavaScript and you could write code to create SVG, or you could focus more on design, regardless learn the basics.

Fantastic evening with @zeldman and @Malarkey and lovely talking to Sue re @geekmentalhelp https://t.co/11NYGp5KaD pic.twitter.com/0pm6vQIZMU

Next Question from an Amaze Employee

(I didn't quite catch the question)

Designing with web standards, people would love a 4th edition, but Zeldman wouldn't trust himself.

Jason Grisby? Cloud four, talking to regarding responsive images, has been involved in mobile before it was cool, he's a very interesting guy, but Zeldman couldn't follow him when he went so far into talking about responsive images.

We're off the student network has now launched with @zeldman and @Malarkey pic.twitter.com/Oa5RAhnkqD

Next Question from Rubert: What if you find an issue and work on a solution, but then you find someone has already done it afterwards.

This happens all the time and this is a great opportunity to reach out to them and connect. Comment on the website, with a link to your post. Someone had spoke to Zeldman about an image replacement technique, so Zeldman got him to blog it, then they found other people had other ways they had done it as well, 'people are very friendly, but yourself out there, be friendly and reach out, I find it's a very friendly sharing community'. On your post, reference the other post and write about the comparison of your approach and theres.

Thanks very much to Mr Zeldman and Clarke for their time and Richard Eskins for organising. A truly inspiring talk and I felt some relief from the tutors that they were backed up by Zeldman with their teachings. Learn the basics HTML / CSS and go from there, who knows where you'll end up.

I think it's great that more and more events like this are taking place and like Jefferey said and I too have experienced running @Mcr_FRED is that there's so many friendly people out there willing to help, it's great to be in an industry that does this and I'm grateful to be apart of it.

Please feel free to pop along to the next McrFRED, it's free and we're all a very friendly. For more information please see: https://s10wen.com/blog/2014/10/13/mcrfred-19-anthony-casey/