By request, this year I'm getting more organised with @digiHike.

It would be great to see you there!

Last year digiHike was featured in net Magazine. Read on for the full article.

Super excited to announce that I'm going to be in the next @netmag talking about 'beyond pixels and @digihike' https://t.co/0qwlGwORCq

Over the past few years, web development has become increasingly challenging. There's more things to learn than ever before and this is growing at an alarming rate. Trying to stay on top of everything is an impossible task, yet for many of us this often gets overlooked and can lead to burn out https://alistapart.com/article/burnout and mental health issues http://geekmentalhelp.com.

On February 9th, 2013 I was fortunate enough to attend the first EdgeConf https://edgeconf.com/2013-london ran by Andrew Betts https://twitter.com/triblondon in London. At EdgeConf I met up with many talented web developers who give so much of their time to help others (thanks again to Andrew for organising the event and giving me the opportunity to attend).

Upon my return to Manchester I was fuelled up and ready to go, but I felt there was something missing. I missed the immediate feedback and talking one on one to people who were vastly knowledgeable and passionate about their craft. Looking back now, for some reason I naively thought "There can't be many web developers in Manchester and why would they want to meet up and network". Looking back now, it seems bizarre that I thought this, I couldn't have been more wrong.

It didn't seem like anyone in Manchester was running anything specifically for Front-End Developers and I was thinking about getting something started https://twitter.com/s10wen/status/297437219763920898.

And now, after EdgeConf I was more determined than ever to get something off the ground. I talked to Dennis Gaebel who ran Buffalo FRED (FRED being FRont-End Developers). After talking to him I decided to get a Manchester FRED up and running.

2 years later, McrFRED is still going strong and this year I was also involved with running my first conference UpFrontConf https://upfrontconf.com along with Dan Donald, Jack Sheppard, Rachel Thompson and Katie Gallagher.

Through McrFRED and UpFrontConf I have met many developers. I've found it incredible how many developers there actually are and further more, how talented, friendly and willing people are to help others. One of the developers I've had the privilege of meeting is Bobby Bobak https://twitter.com/bobek_balinek.

After one McrFRED Bobby and I were discussing how much there is to learn these days and we decided we wanted to do something to 'unplug' and encourage others to do the same. We wanted something easy and quick to get set up and similarly for anyone who wanted take part.

And, so, digiHike was born!

I remember having a really productive evening with Bobby. I was sat in my front room, communicating with Bobby over Slack. Within 30 minutes, we had a logo, Twitter, MailChimp, Tumblr, Attending and Gmail account all sorted and ready to go.

Our first digiHike https://attending.io/events/digihike was Kinder Scout in Edale, this is one of my favourite walks in the UK and despite having done this walk a few times before I still managed to lead us all into a field full of sheep and crossing a river. Whoops, sorry people!

Two things struck me from the first digiHike.

Firstly, although everyone that came are somehow involved in the tech community, little of the conversation was tech related. Earlier this year I was a volunteer at Smashing Conf in Oxford and I'm constantly reminded of Christopher Murphy's https://twitter.com/fehler talk regarding 'Increasing your scope'. The conversations I've had on digiHike's have been extremely varied and you never know when a talk about something seemingly completely random may in fact help you to solve a problem that's tech related.

Secondly, although the weather was wet and windy, everyone remained in high spirits and extremely positive. Hiking up a mountain will generally mean no reception, so constantly checking social media notifications and email simply isn't an option. For me, when working for too long and under pressure, I'd describe that my brain feels knotted and tangled up. Getting away from a computer and getting in some fresh air, along with great company and physical activity leads to my brain becoming unknotted and untangled. I got the impression others felt this way as well.

I'm actually writing this having just come back from the top of Mount Toubkal in Africa, I'd love to take the credit for organising this trip but it was actually organised by none other than EdgeConf organiser Andrew Betts. Funny how these things work out isn't it.

If you're around the north west and fancy joining us you're more than welcome and if you're further afield, I'd be more than happy to pass on our assets to you and help you get up and running with a digiHike in your area.

Thanks for reading and hope to see some other digiHike's get up and running! (or walking) ^_^ 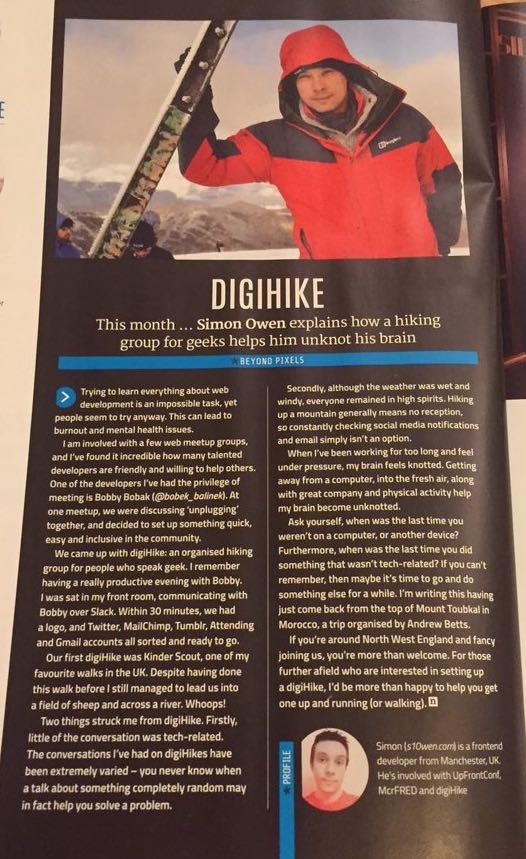