Carrying on from the Chillout Weekend and Halo 2, here's Halo 3. 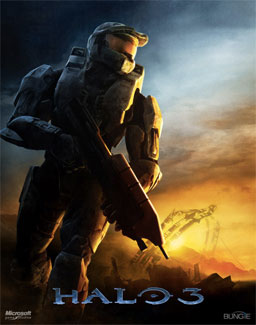 So… I started taking photos and making some notes… Then… Oops, a few photos and two notes in and I couldn't stop until I'd finished it… what… a… game… Second attempt, ah there we go…

Cortana! 'they let me pick', you had… luck' yeah luck and my awesome skillzz… look up and down :smile:

Secure perimeter defenses, Neutralize hostiles in the hanger. Get back to the ops-center. Rescue marines in the barracks.

A Spartan! We're going to be alright. Truth digging in South Africa. Prophet of Truth looking for the Ark to fire all the Halo rings. Commander Keyes, Lord Hood, planning a low lever strike… Oh oh… Prophet of Truth has taken over the feed. Evacuate. 'Dude, have you got socks I can borrow' lol!

Lead marines away from the base.

Find transport, nice fire animation, different types of Warthog, one with a Turret Gun, one with a Roll Cage, awesome open landscape, Brute Chopper bike awesome… Wraith, plant grenade, boom! Back in Warthog, lots of Wraiths and Choppers, lots and lots of Brutes! Made it :smile:.

Start off in a Warthog convoy, rain and thunder and lightning, 'Traxus Heavy Industries' that would make a nice T-shirt :wink: Opening up the doors for convoy, Ghost, anti-air Wraith, amazing views, ships fighting above, love the blue flames on the destroyed Covenant vehicles, Power Drain, Cortana cut-scene, loads of Marines and Covenant fighting in vehicles on ground and in the air… 'Something big closing on your location', Scarab!!! Amazing detail, on it whilst, it's moving, find the core, 'Get away it's going to blow!', amazing explosion! Parts still move now it's destroyed, driving Mongoose with Rocket Launcher Marine on back, Mongoose not allowed in :/ Another.. Cortana cut-scene, Hunters, Brute with Grav Hammer goes invincible, Massive Gun in distance, operate / detach turret, destroy big gun :smile: Nice Master Chief shot, Cortana.. 'This is the way the world ends'. Damaged Covenant ship comes in and crashes. 'What is it? More Brutes, Worse…'.

So… you have to go back the way you came. Lots and lots of flood. Flame Thrower! Cortana cut-scene, mentions the Gravemind. Loads and loads of flood, different types of Flood and Covenant helping out, 'Do not be afraid, I am piece' cut-scene Gravemind. Inside Flood like corridors, retrive Cortana, the Oracle / Monitor! Cortana 'It doesn't know about the Portal' a way to destroy the flood without the Halo rings.. Covenant and Humans now working together to take out The Flood.

7) The Ark - "Search the waste for the Cartographer."

Awesome intro video showing the Pelican dropping down and landing.

Green Phantoms, laser! Waterfall, water, Pelican drops of a Mongoose and a Warthog, 'get to the first station and shut it down', huge Covenant ship in distance in sky, dang Mongoose not allowed in, Brute with invisibility Grav Hammer, lovely view through transparent floor, deactivate shield generator, Johnson in trouble, head back to the beach, Hornet… amazing! Kicking ass :smile: Hunters, Buggers, Brute with Turret, Brutes with active camo, deactivate shield generator, oh oh.. flood! Back outside, Tank and Warthog waiting, 2 scarabs! One down, one to go, stop Truth from firing the rings, no vehicles allowed again, Cortana cutscene.

Head back to the lift, Cortana cut scene, lots of Flood, there's a 'mini ring' can activate this to wipe out the local Flood.

Find Cortana, on Flood type planet, Gravemind cutscene, Cortana cut scene, and again, lol floating Elite, nice spark animations, looks like a Covenant place that's been taking over by the Flood, Flamethrower :smile:, oops got, skulls and bones, Flood corridors open up, tower blows up, find Cortana, she has the Index from the first Halo.

Go back the way you came, destroy High Charity, start a chain reaction, everything blowing up, Arbiter with Flamethrower, Pelican and out of here.

Find the control room, snow, head through the cliffs with the Arbiter, icicles, Flood dispercle pods, get to top of tower. Lots and lots of Flood, Gravemind cutscene, FMV - Johnson goes to fire the ring, the Monitor says this is unacceptable as a premeture fire could destory the arc. Kill the Monitor! Get Laser from Johnson, Johnson doesn't make it, Halo activated, go back the way you came, escape, corridors, Warthog, awesome drive to the finish with everything exploding :D

Extra FMV! - Cortana tells Master Chief the Halo ring was fired and we got through the portal, Master Chief goes into cryo and tells Cortana 'Wake me, when you need me'. Other Notes